In late March, Lien AID was in the Tra Vinh Province of Vietnam to hand over two Community-based Water Social Enterprises (CWEs) to the Da Loc Commune, following the completion of a successful pilot that will benefit more than 15,000 people across 8 villages.

“The aim of the pilot is to assess the effectiveness of the CWE approach in providing affordable clean drinking water in rural communities in Vietnam. We hope that this model will catalyze an alternative approach to the provision of a water supply in rural Vietnam. Particularly, one that continues to be affordable to small/remote rural communities,” explained Lien AID CEO, Mr. Koh Lian Hock.

As one of the poorest communes in the Tra Vinh province, and inhabited by a high concentration of ethnic Kh’mer, Da Loc has very low access to clean drinking water, with the added problem of high levels of salinity and alkalinity affecting their water sources. Due to rising sea levels, this is a condition common to coastal areas like Da Loc.

Thach Thi Dan is 30-years-old and lives in Huong Phu B village. Before the community-based water social enterprise was built, her family drank water pumpled from a dug well, which they rudimentarily treated on their own with chemicals such as alum. They also drank rainwater.” 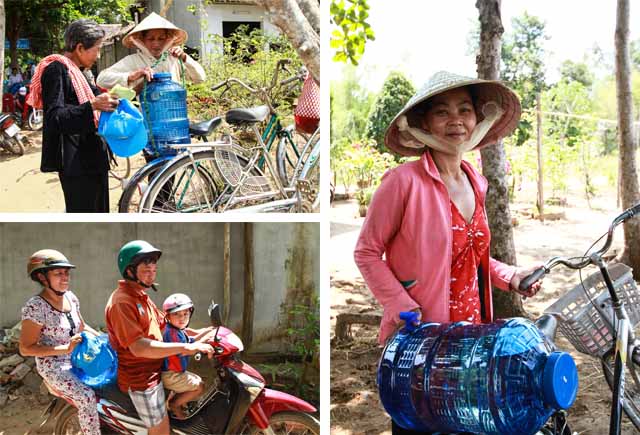 Both CWEs began operations in April, with the water sold costing a fraction of the price of commercially-produced bottled water sold in the market.

To find out more, take a look at our Community Water Enterprise Programme.

The provinces of Tra Vinh remains one of the poorest in the Mekong Delta, with a high concentration of ethnic minority people (Kh’mer) residing in the area. Living conditions are made even more challenging with water sources in the coastal province severely affected by salinity and alkalinity problems, due to the rising sea levels. Unfortunately, many are unable to afford commercially-bottled water and risk their lives daily by drinking from unsafe water sources.

Earlier this month, Lien AID initiated the construction of the first pilots of its Community Water Enterprise in Vietnam’s Da Loc Commune in Tra Vinh Province, in an official groundbreaking ceremony attended by the officials from the Vietnamese government, including the Director of PCERWASS, Mr. Bui Van Mung.

Now with the expansion of the programme to Vietnam, Lien AID intends to provide a sustainable and affordable source of clean drinking water for the poorer rural communities there.

15, 134 people across 8 villages in Da Loc Commune are expected to benefit from the development of two community water enterprises.

During the dry season from January to June every year, contaminating saltwater seeps into the communities’ drinking water supply in the coastal provinces of Ben Tre and Tra Vinh in Vietnam. With municipal water treatment systems unable to remove this high saline content effectively, rural communities are forced to buy water from other sources. Villagers wait in long queues and pay exorbitant prices to purchase drinking water from these alternative sources, some with no guarantee of the water’s quality.

Earlier this year, a pilot initiative by Lien AID in partnership with the National Centre for Rural Water Supply and Sanitation (NCERWASS) of Vietnam equipped three municipal water treatment plants with additional desalination systems, successfully removing the high saline content in the drinking water supply, effectively making it safe for consumption.  This continues to be sold at an affordable price, ensuring that these communities are able to carry out their lives with guaranteed access to clean and affordable water.

An estimated 7, 475 beneficiaries have benefitted from this pilot initiative. However many communities living in the coastal provinces on the Mekong Delta continue to live with this challenge, and a lack of access to clean drinking water.

Rural communities living near four district hospitals (with a capacity of 100-200 sick beds) in the Nghe An Province (Vietnam) breathed a sigh of relief as medical facilities were equipped earlier this year, to treat harmful medical wastewater making it safe before release into the surrounding environment. Poor infrastructure had left these communities at high risk of coming in contact with the hazardous medical waste. According to the Vietnam News, Vietnamese hospitals discharge about 2.5 – 3 tonnes of untreated medical waste a day.

Without adequate wastewater treatment facilities, untreated medical wastewater is discharged into open concrete drains, absorbed by the soil and seeps into groundwater; often the drinking water supply of patients and staff reliant on wells on the compound for consumption.

The partnership between Lien AID and the Ministry of Health Vietnam saw four wastewater treatment systems installed, and operations & maintenance skills imparted to the hospital staff.  These district hospitals are now able to treat the harmful medical wastewater before it is safely released into the environment, benefitting the community of 52, 800 people.

More importantly, the project enabled local authorities to compare the merits of various technologies deployed and gather practical experience for subsequent implementation of such solutions for district hospitals (with a capacity of 100 – 200 sick beds) in Vietnam.