We focus on rural poor communities in the lowland plains of the divisions of Magwe, Mandalay and Ayeyarwady.

9.1 million rural poor in Myanmar do not have access to safe water 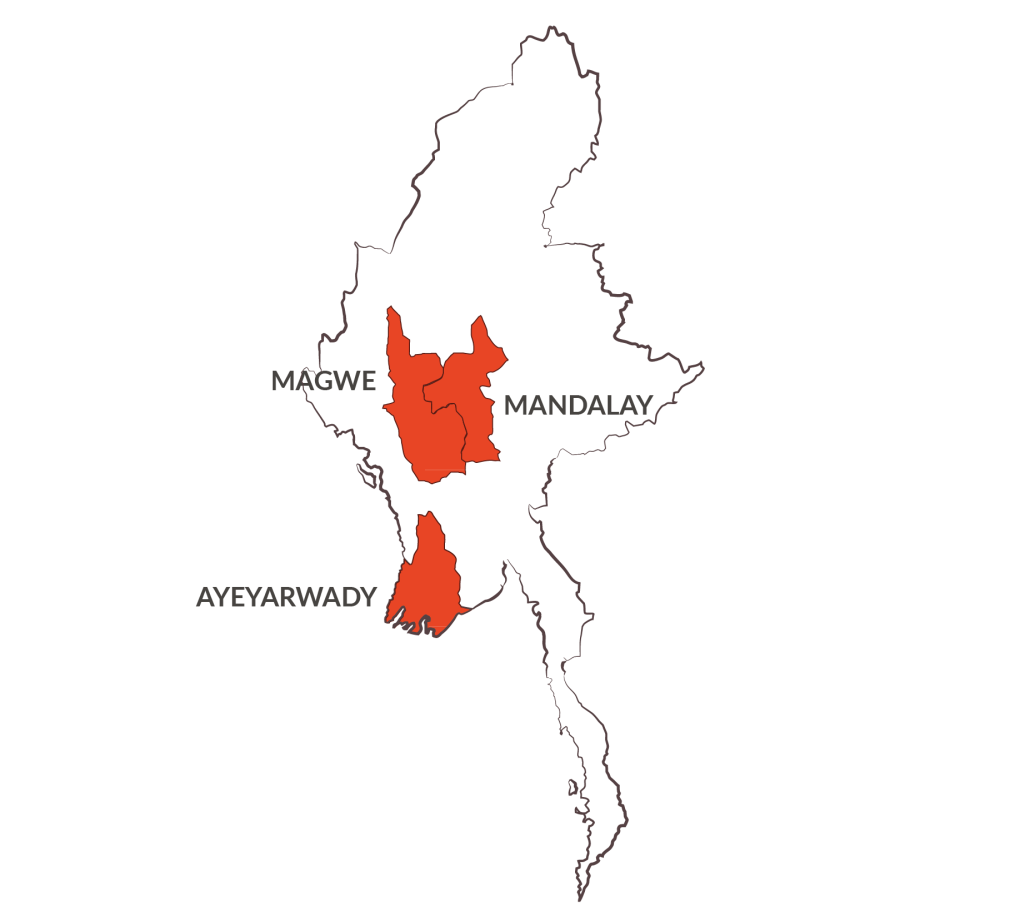 Covering large parts of Magwe, Mandalay, and the lower Sagaing divisions, the dry zone is considered the historical and cultural heartland of Myanmar, and is home to 34% of its population. Situated in the shadows of the Rakhine mountain range, the climate here varies significantly from semi-arid to semi-humid. Intensive conversion pressure of the Ayeyarwady Dry Forest ecoregion within the dry zone has resulted in a landscape with poor vegetative cover and marked by exposed rocks. Surface water is dominated by the Ayeyarwady river, Myanmar’s largest and most important commercial waterway, which follows a broad, open course across the dry zone (from the Kachin state) and empties through the Ayeyarwady delta into the Andaman Sea.

An extremely fertile area enriched by the alluvial silt from the Ayeyarwady river and its tributaries, the Ayeyarwady delta is also densely populated. The delta receives heavy rainfall and is dominated by 2 distinct ecoregions, the Ayeyarwady Freshwater Swamp Forests and the Myanmar Coastal Mangroves – fanlike marshes with oxbow lakes, islands and meandering rivulets and streams. Both ecoregions here have been heavily degraded with the upper and central delta regions almost entirely under agricultural cultivation (mostly rice). Heavy annual rainfalls in the delta, combined with the flow and sediment load of the Ayeyarwady river have resulted in the extension of the land area of the delta into the Andaman sea at a rate of approximately 50 metres per year.

Situated in the shadows of the Rakhine mountain range, the dry zone receives very low rainfall,  with the lowest rainfall levels in Myanmar. There is also very low underground water recharge because of uncontrolled surface runoff and the low moisture retention of the subsoil. Both the dry zone and the delta regions experience seasonal droughts and erratic rainfall, with drought conditions relatively severe in the dry zone. This has resulted in unreliable water supplies, affecting not only domestic water availability but also livelihoods and food security.

In the delta region, rising sea levels combined with intensive water extraction has resulted in intrusion of salt water into coastal aquifers, increasing salinity of groundwater and affecting potable water availability and crop yields. In some areas of the dry zone, moderate salinity is also present in groundwater due to natural processes or irrigation developments. Additionally, in both the dry zone and delta regions, arsenic is present in pockets under the alluvial plains, with 3.4 million people living in the delta area at risk from arsenic contaminated groundwater.

Myanmar lies on a very active earthquake zone with the Sagaing Fault passing through central and western Myanmar and the delta region is also vulnerable to cyclones and tsunamis. These natural disasters occur quite frequently with the extent of destruction sometimes quite widespread and devastating. Storm surges in the delta region and torrential rainfall in the dry zone also cause severe floods and landslides which are exacerbated by poor drainage and flood protection infrastructure.