By the time our boat arrived at Kakayo village, located in the south part of the Ayeyarwady region in Myanmar, a small crowd had gathered at the wooden jetty. A tall, slender woman stood out from the crowd. Greeting me with a firm handshake, she introduced herself as Daw Mu Mu, a member of the village development committee. 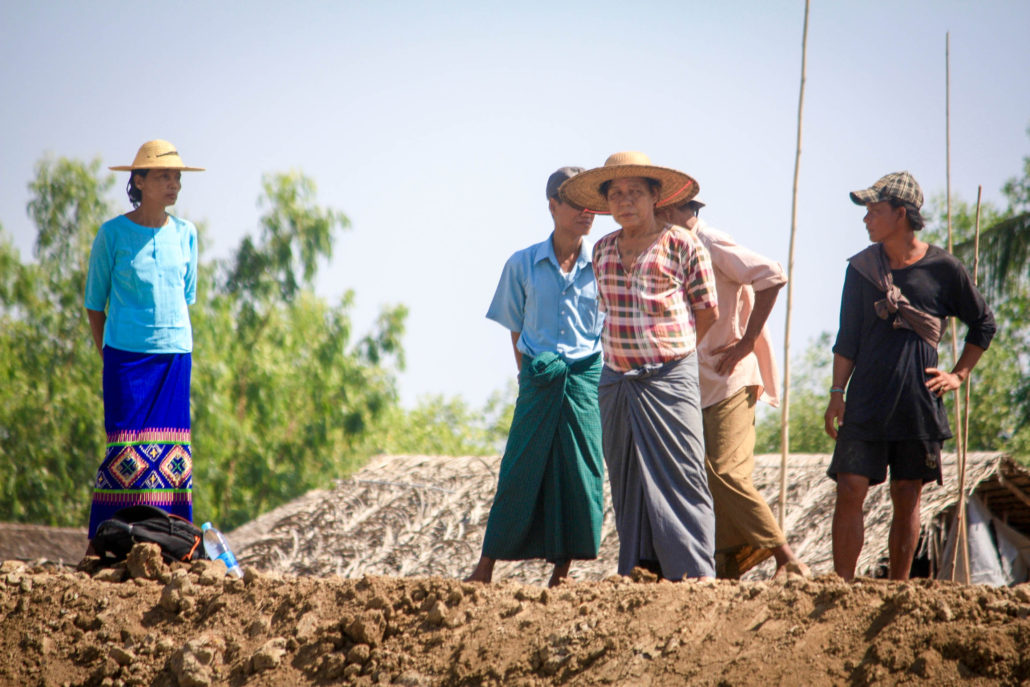 Daw Mu Mu standing at the edge of the construction site for the new rainwater collection pond.

It soon became apparent that Daw Mu Mu was a well-respected figure in the village. Carrying with her an indefinable air of grace, she led the way with long strides as we surveyed the construction site for the new rainwater collection pond. Apart from sitting on the village development committee, the 51-year-old woman wears many other hats – she is also a mother, provision shop owner and farmer. 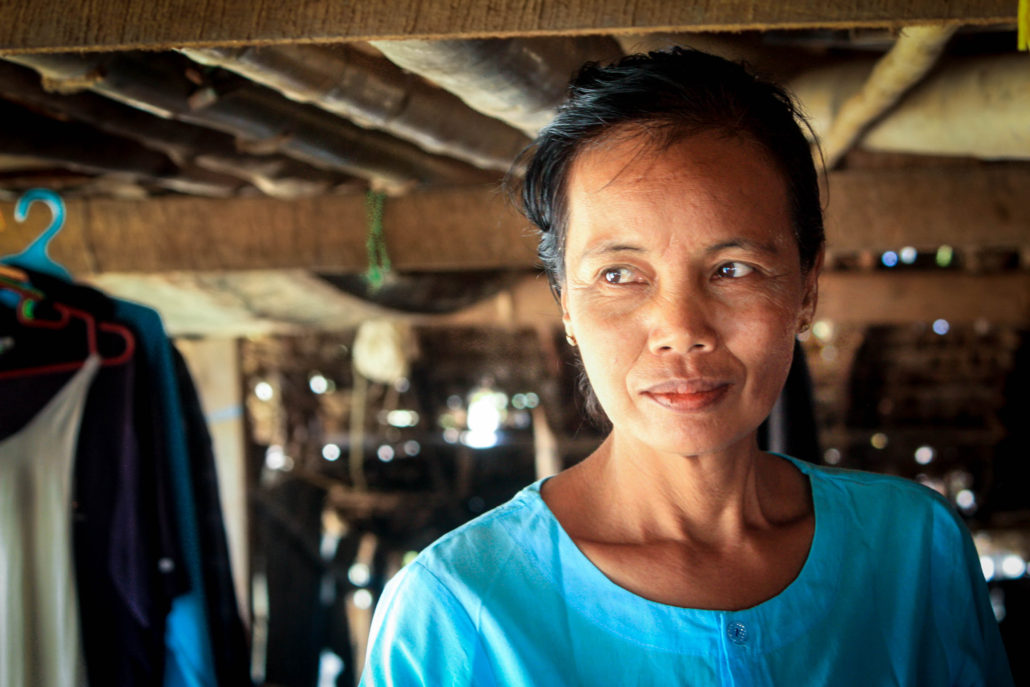 Unwilling to let her only daughter, Myint Zu Aung, accept the fate of an ordinary village girl, Daw Mu Mu’s foresight led her to a neighboring village in 2008, where she worked hard to earn more income so that her daughter could attend school in nearby Labutta city. Her husband stayed behind, working as a fisherman like most of the other men in the village. The couple worked hard to support their child, in the hopes that she will eventually lead a better life than they did.

Then Cyclone Nargis struck. Having never experienced a natural disaster of this scale, Daw Mu Mu rushed back to the village not knowing what to expect. Nothing could have prepared her for the extent of the damage that was done. The cyclone had wiped out most of the village population, leaving behind it a trail of wrecked homes, uprooted trees, dead animals and disfigured human corpses. 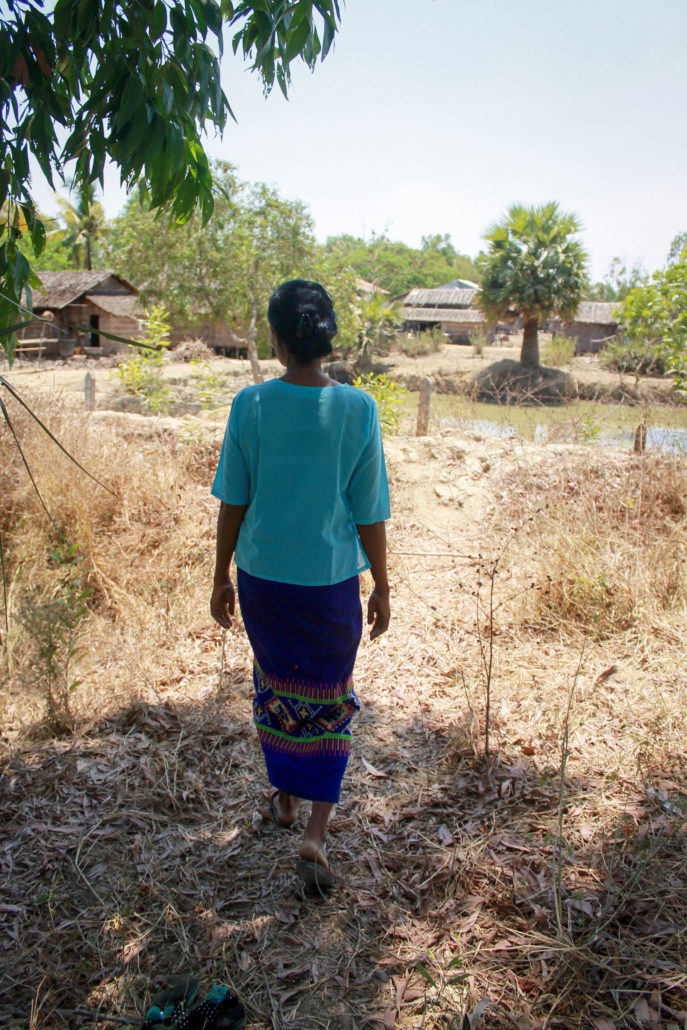 Daw Mu Mu’s husband was nowhere to be found. With her husband presumed lost, the only short-lived moment of happiness came when she found her daughter, who had managed to catch a boat ride back to the village after the cyclone. When asked what they had said to each other then, Myint Zu Aung replied,

“We could not speak. We could only hug each other and cry.” 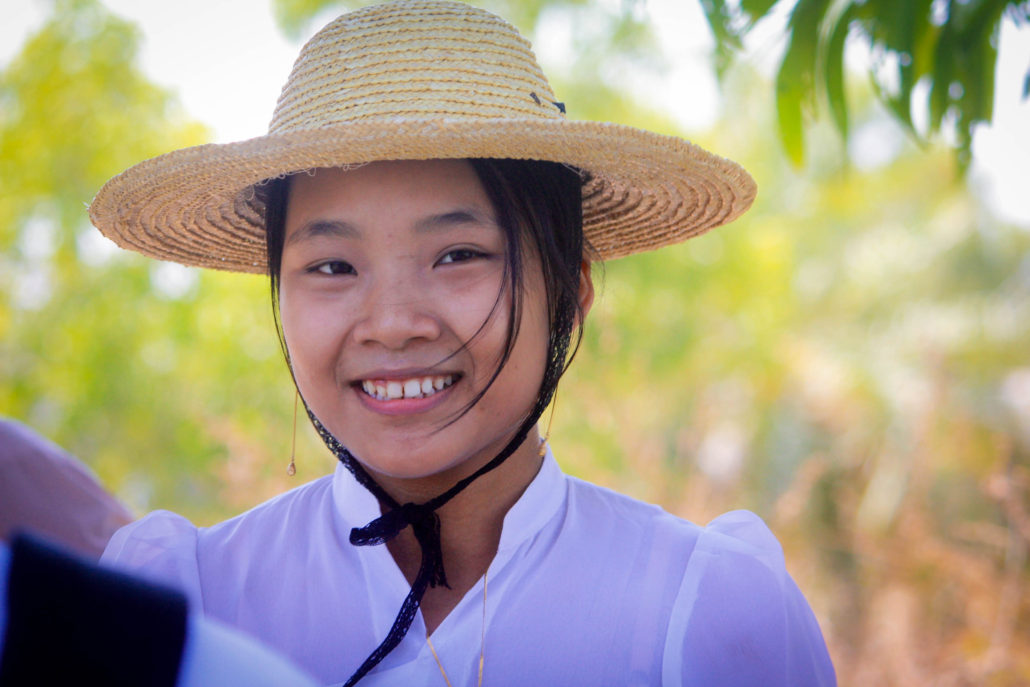 Though shackled by grief, Daw Mu Mu did not have the luxury of mourning for her lost loved ones for long. She went back to work and started to rebuilt the village with others, working twice as hard as before, this time singlehandedly supporting her daughter’s school fees. Miraculously, her husband returned unharmed after being missing for 2 years and 4 months. It turns out that his fishing boat got carried away by the current and ended up on the Indian shores. 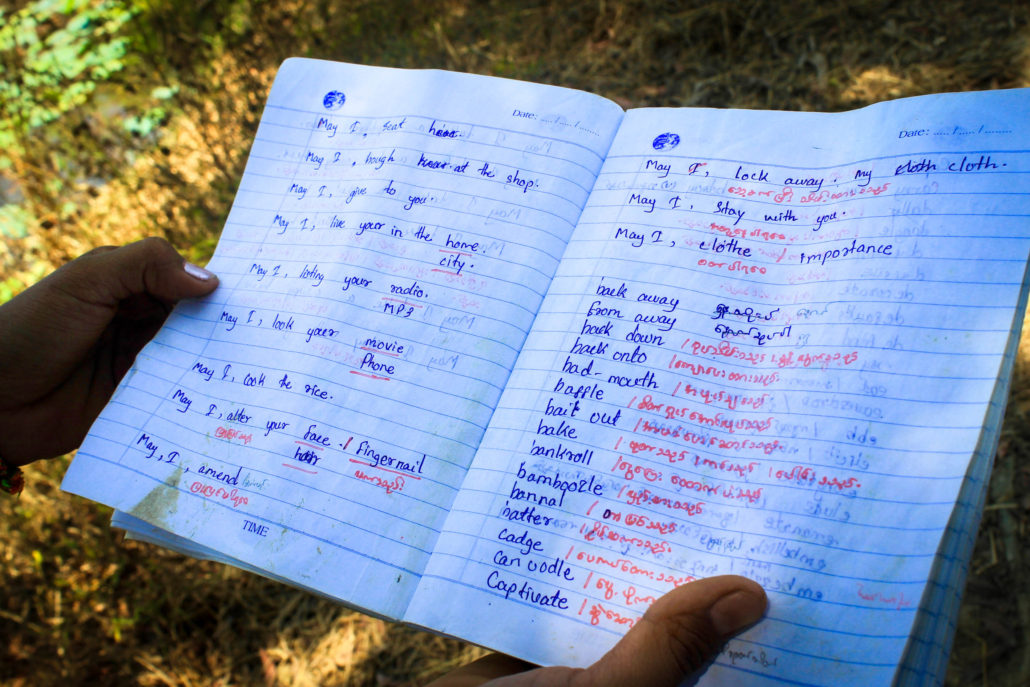 But the problems kept coming. The village’s only source of relatively clean water was two village ponds, with water levels often dropping dangerously low during the dry season. In 2016, the ponds dried up, and the children in the village started drinking dirty water when their parents were away fishing or farming. 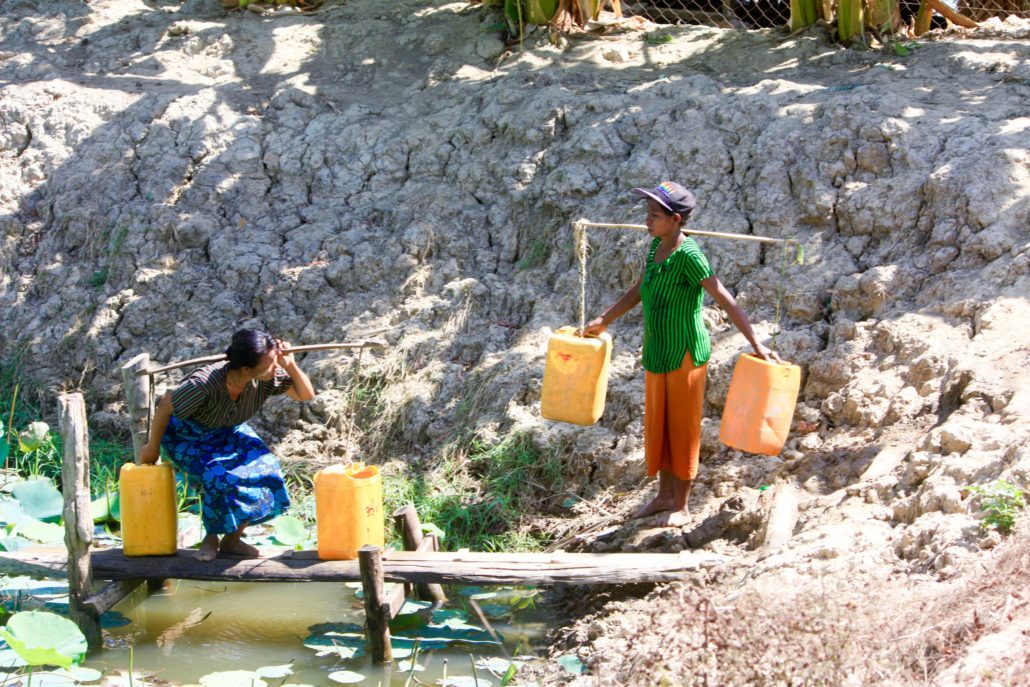 Women collecting water at the existing pond with buckets.

It was not long before the village was hit by a diarrhoea epidemic. Many of those affected were young children. Daw Mu Mu and the other villagers converted the village school into a makeshift health centre to quarantine and care for the patients. Tragically, they could not save a two-year-old boy in time and he passed away. 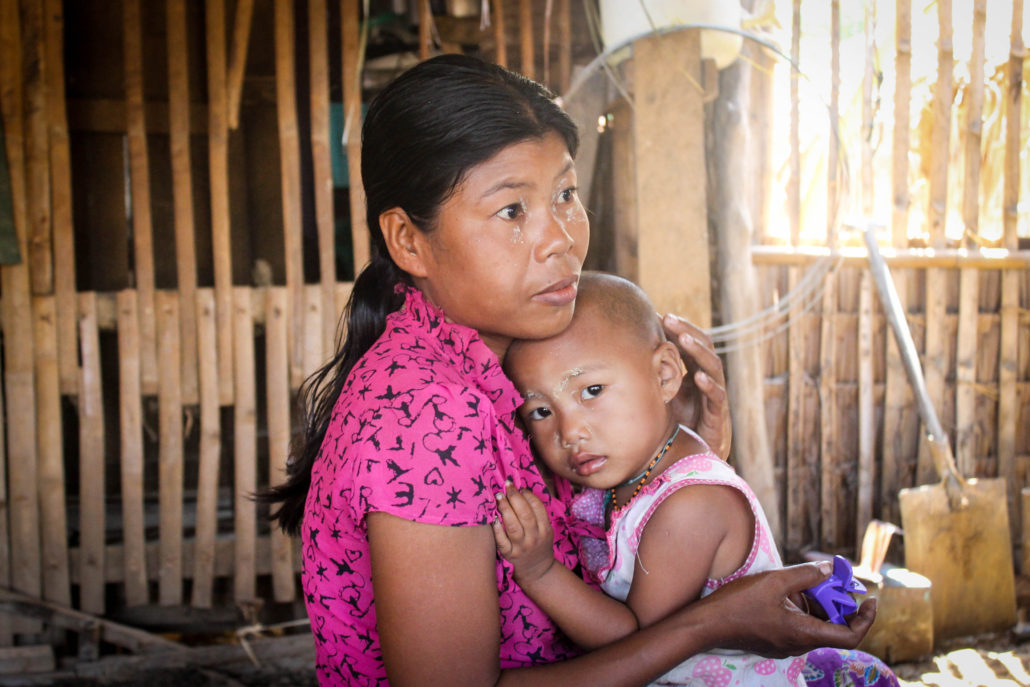 Daw Mu Mu was devastated and could not bear the thought of losing more family and friends. She was determined to improve living conditions in the village, starting from better access to clean water. Early this year, construction began on the new fenced pond and hand pumps in the village. When completed, the new rainwater collection pond will provide an additional source of clean water for the villagers during the driest months. 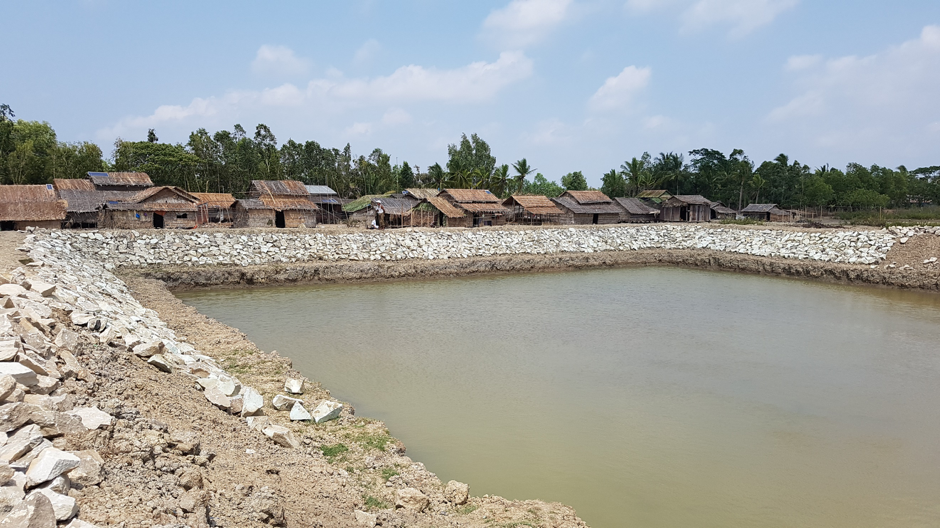 The construction site for the new rainwater collection pond.

Daw Mu Mu hopes that villagers will enjoy better health after the new pond and hand pumps have been completed. Like many of the other villagers, her daughter regard her as a role model. When I commented on her strength and resilience, what she said stuck with me throughout the rest of my journey in Myanmar. 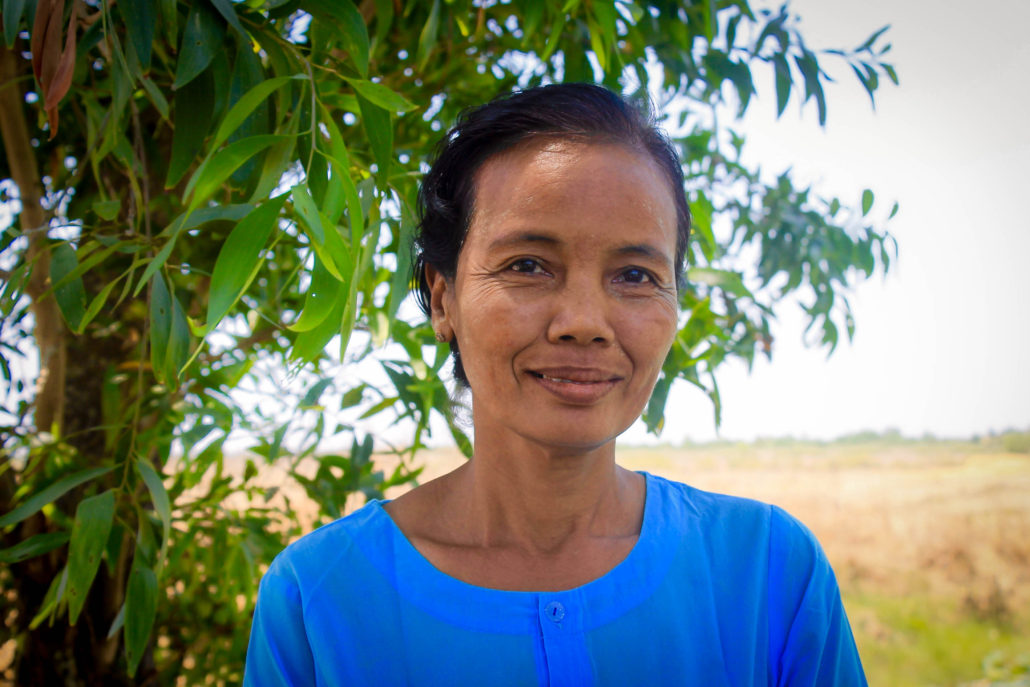 “I keep my feelings to myself.”, she said softly. “The tears fall, but my mind is strong.”

This project in Kakayo village, Labutta Township co-funded by Lien AID, is implemented under our pilot clean water projects in the Ayeyarwady region in Myanmar, and expected to be completed in 2017.

He Would Have Been 7 This Year
Scroll to top